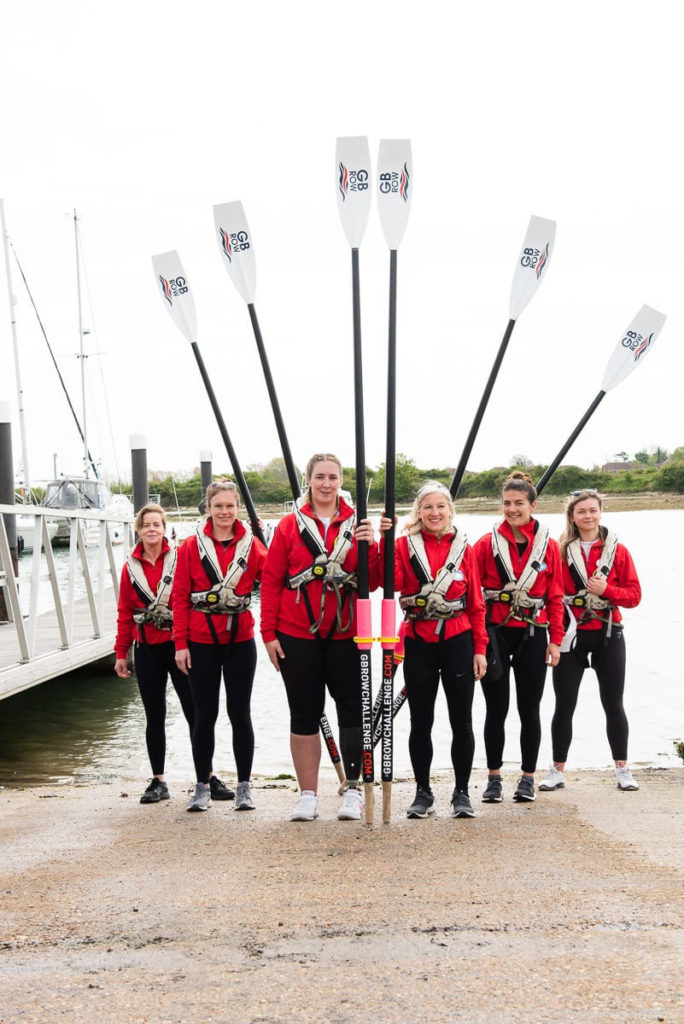 All Systems Row are a six woman team setting themselves a 35 day target for the race, raising money for Renewable World.

I was born in East Sussex and graduated from the University of Plymouth in 2020. I have recently moved to Portsmouth to start my career as an NHS Physiotherapist which has been quite a challenge after being thrown in the deep end with Covid. This experience has had a big impact on me and I have become mentally stronger as a result.

I started rowing in the gym when I was 11 with my dad and through competing in several indoor rowing competitions was invited to join Bexhill Rowing Club. Since the first moment I went out in a boat I realised how dull erging is and was desperate to spend as much time on the water as possible! My proudest moment in a boat was winning at Womens Eights Head of the River Race in my first year at university (I cried!).
I generally love anything outdoors, from sea swimming and paddle-boarding to walks and runs in the countryside.

Despite having never participated in a challenge like this before, I'm sure it will be an incredible life experience as well as extremely mentally and physically hard. But nothing worth doing is easy, right? 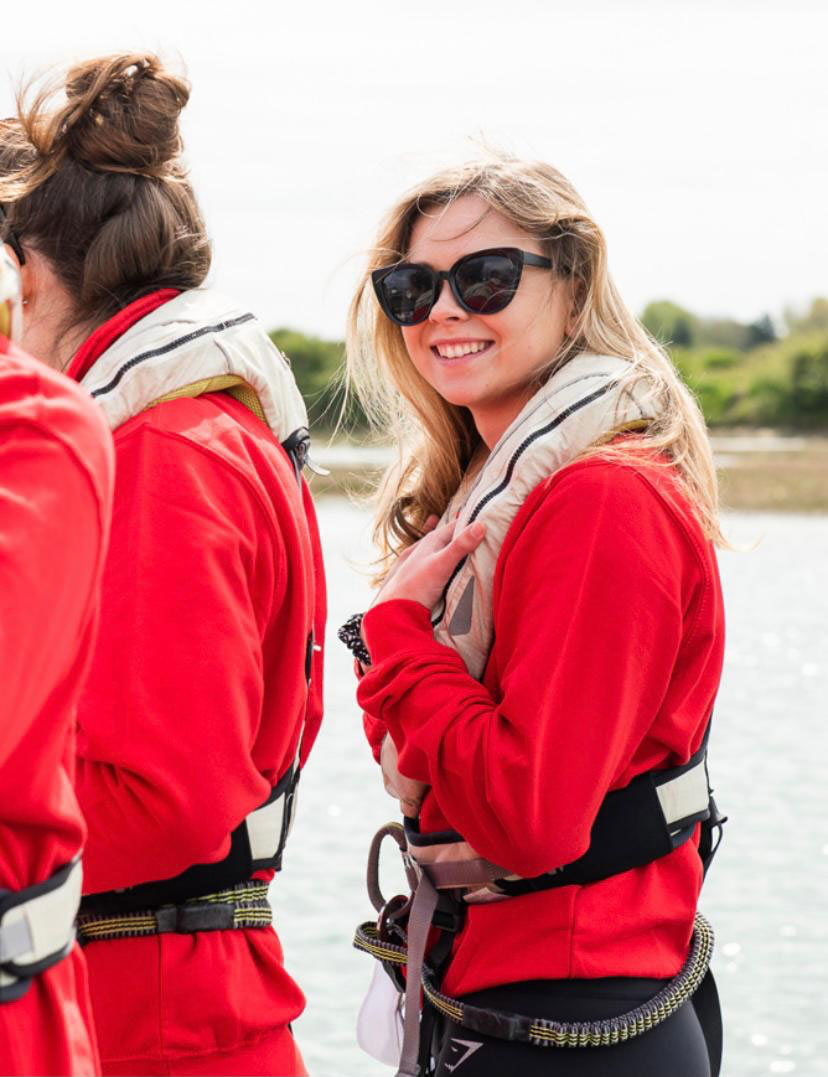 I lived in Bexhill most of my younger years before going to Exeter Uni to study Sport and Exercise Science, followed by having a Sports Massage business and finally retraining as a Physician Associate. I now work in the Orthopaedics department at Tunbridge Wells Hospital.

I have always had a competitive sporting spirit. My first challenge was walking 100 miles in 5 days across rugged terrain in Cumbria raising money for Prostate Cancer UK. I was later inspired to try rowing by a fellow colleague who always had great things to say about it and I’ve not looked back since. My proudest achievements have been winning the gold medal in the ladies open pair at the British Rowing Offshore Championships and Beach Sprints in 2019 and later that year winning the Ladies Senior Open at the CARA South Coast Championships in Dartmouth.

When I’m not rowing, I enjoy walking the dogs, cycling, spending time with friends and family and generally anything outside! I am excited to be able to take on such a huge personal challenge both mentally and physically and I look forward to everything it will bring! 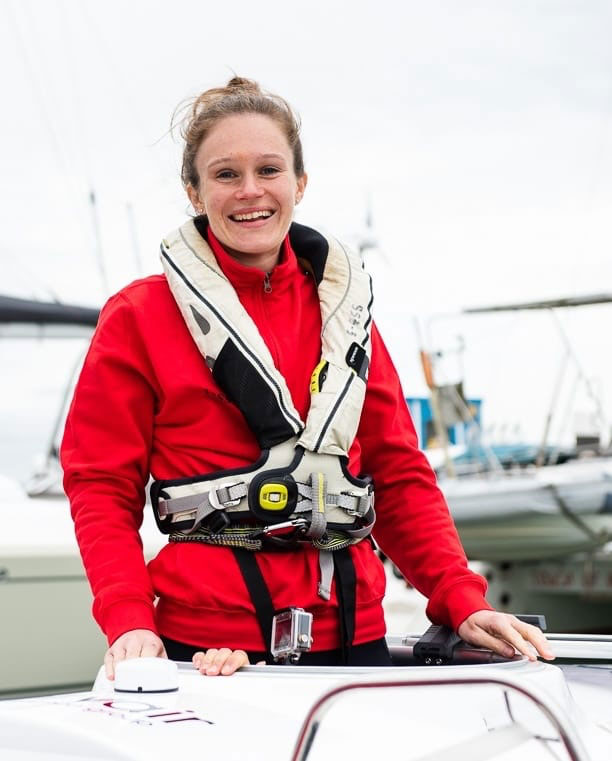 Born in Torbay, South Devon, moved around in my childhood, and I was even lucky enough to have lived in Cyprus for a few years. At the age of 17 I moved to Scotland and I lived there for 6 years, where I studied Access to Nursing at Moray college UHI. My daughter was born in 2004. I worked in the hospitality sector, as well as agency care work, before I then moved back to Devon in 2009.

I was born with Talipes Equinovarus and suffered with arthritis in my early 20’s and developed Chronic Regional Pain Syndrome. After several operations and losing my way with life and my lifelong dream of becoming a nurse, I decided that amputation would be my best option; this happened on the 2nd of February 2017. When I knew this was going ahead, I took up Coastal Rowing with Mayflower ORC, largely to say I have tried it- little did I know that I would catch the rowing bug and be invited to Talent ID for GB Para Rowing in the August of 2017. I took up fine boat rowing with Dart Totnes ARC, and in March 2018 I was successful at gaining a place on the GB Para Development squad. That same year I started a Foundation degree in Sports Therapy with City College Plymouth. In December 2018 I was lucky enough to earn Bronze at the British Rowing Indoor championships, however in November 2019, I had to withdraw from the squad following the passing of my coach. However, this was not the end, and I am extremely grateful for the opportunity and experience, but I decided it was time for a shift in direction. After successful completion of my foundation degree, I carried on to my BSc Hons in Sports Rehabilitation and had to have revision surgery in October 2020.

I enjoy taking part in various challenges varying from the St Luke’s Midnight Walk whilst using crutches in 2010, to the more recent Somerset 525 virtual rowing champs, Dorset Conquer the Cape 725km indoor and outdoor rowing, to the 3 peaks Challenge for Love Rowing. I am also an intern Sports therapist for Plymouth Albion RFC and I am on track to start my MSc in Pre reg Physiotherapy in September 2021.

As I face challenges daily, I thought why not add another by taking on a row around Great Britain. Since finding this opportunity. it has allowed for a big tick off the bucket list, and the competing and completing with the crew will also be a huge achievement and certainly further shape me as a person. 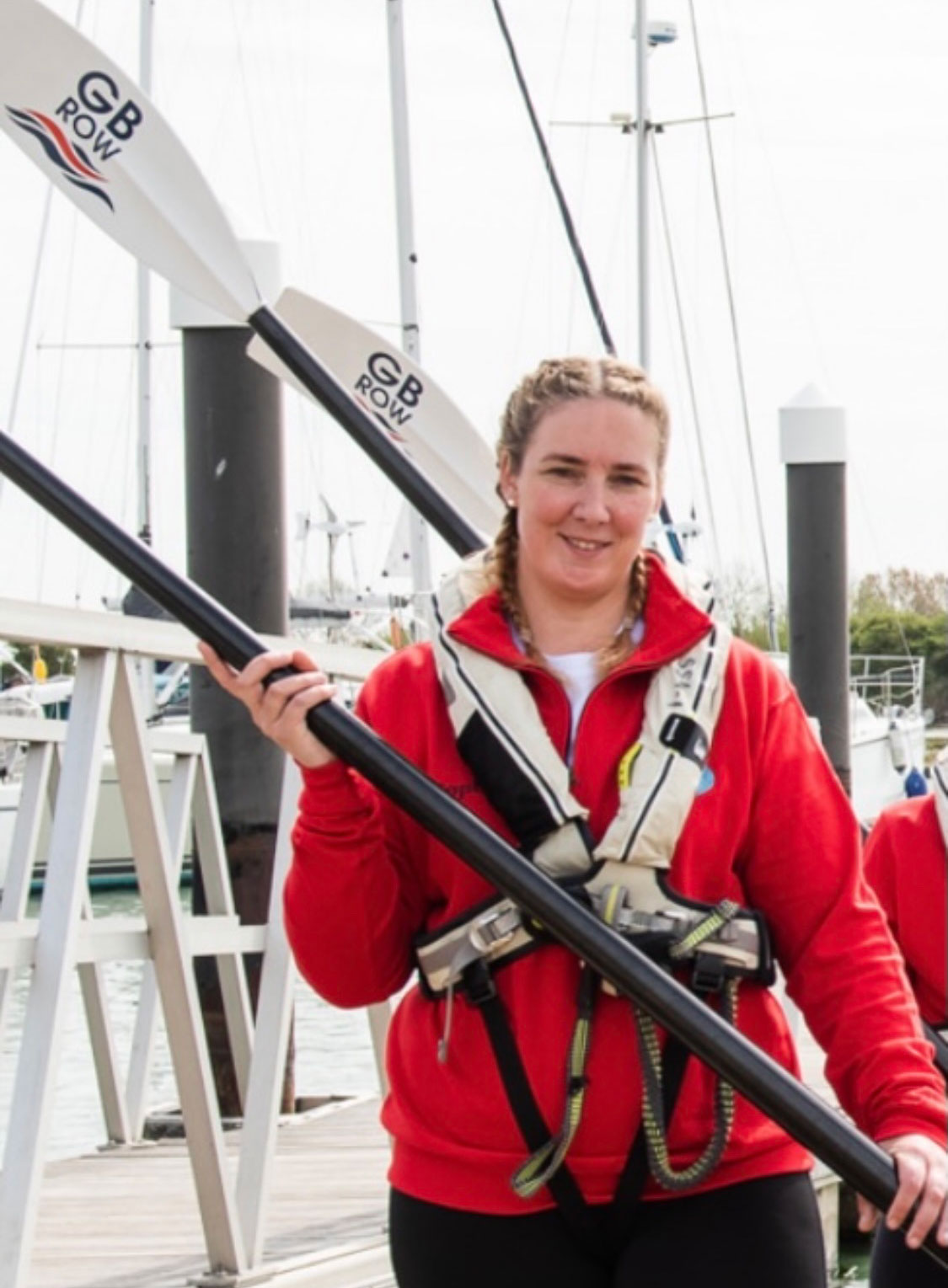 Originally from Northern Ireland, I moved to Nottinghamshire and represented the county as captain of the junior hockey team before studying French at Newcastle University, with a stint working as a ski guide in the Alps.
On graduating, I cycled 800 miles through England, before managing teams in West and Central Africa in the aid and development sector. My first expedition many years ago, was to Zimbabwe with Raleigh International, then I was on a team researching a tropical disease in Indonesia. I have completed 6 ultramarathons, including 100 miles on the North Downs. This year I am running the length of the Lake District in a day.
Married 18 years, I have 4 children and spent 3 years living in Yemen before the war. I am a Social Worker with children seeking asylum in the UK. I am excited about becoming a rower and hopefully a world record holder. 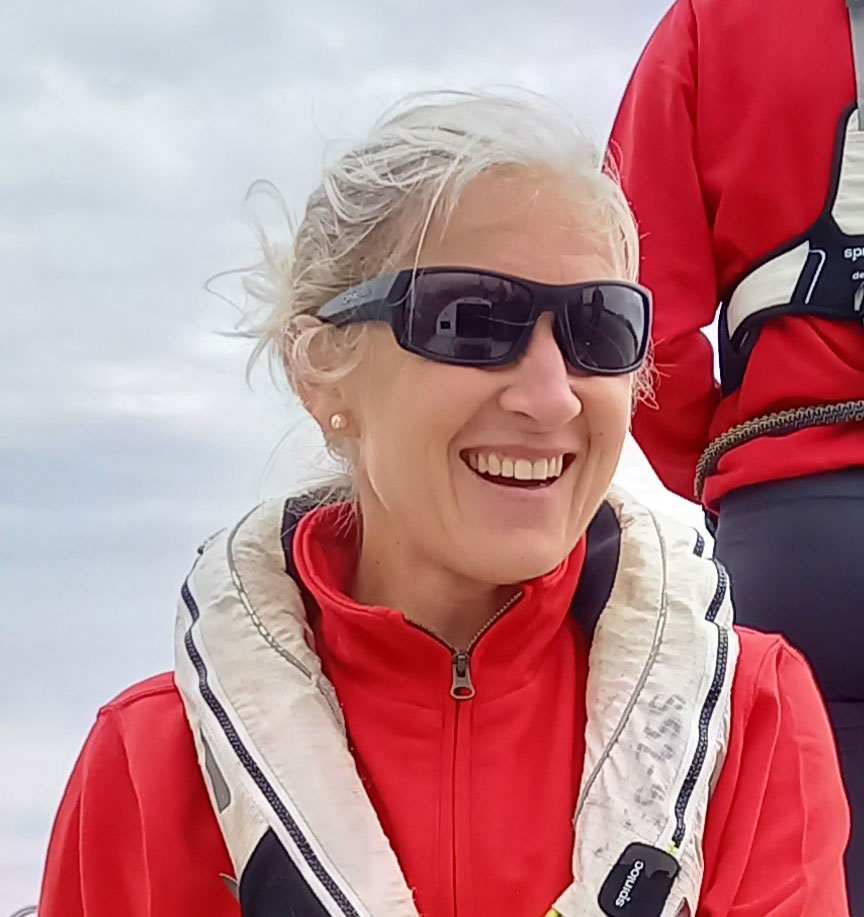 A physiotherapist in profession and keen charity fundraiser, I like to physically challenge myself; anything from a skydive to the 3 Peaks Challenge, raising over £1500 for good causes so far. Additionally, I feel strongly about conservation and spent my university summer volunteering aboard a sea vessel and teaching in Madagascar.

To date, nothing has taught me more about my mental resilience than working as a respiratory physiotherapist on intensive care during the pandemic. I am the first from my family to qualify from university and am proud to have been able to step up and help during COVID-19. I thank ESHT for their continuing support and Bexhill rowing club for keeping me fit and focused throughout this time.

I am predominantly a horse rider but with a change in circumstances I have been able to fully commit to personal improvement in my newfound hobby. Combining my love for the sea and training with determined and likeminded people, this is the beginning of an exciting new era and an ultimate mental and physical test of my training. 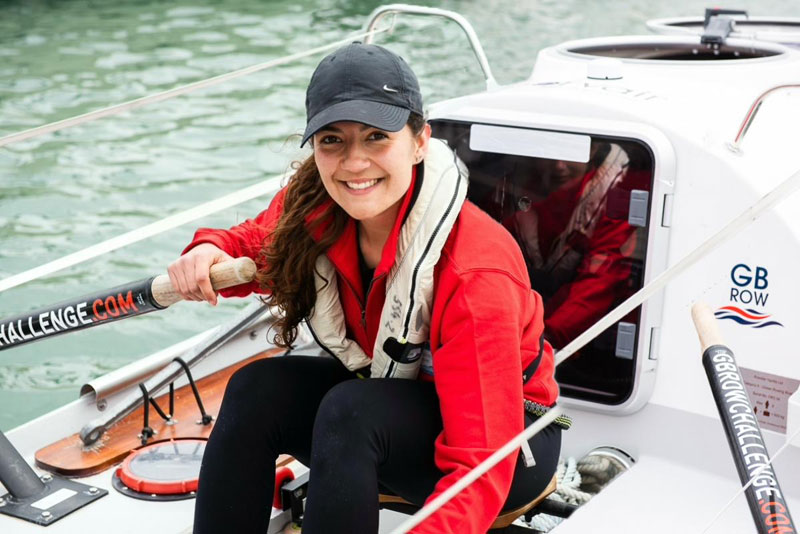 I am from Massachusetts, USA where I first rowed at University on the Charles River about 34 years ago. I moved to the UK in 2000 and married a Brit, we have a 13-year-old son.
I work as a NeuroPhysio with acquired brain injury survivors. It is a job I find stimulating and rewarding.

I rediscovered rowing 4 years ago, but this time on the sea. I absolutely love it and it has given me a new lease on life- training with rowers of all ages, pushing myself beyond what I thought was possible. I am thrilled about taking on this challenge with 5 strong women and I can’t wait to take in the gorgeous British coastal landscape along the way. 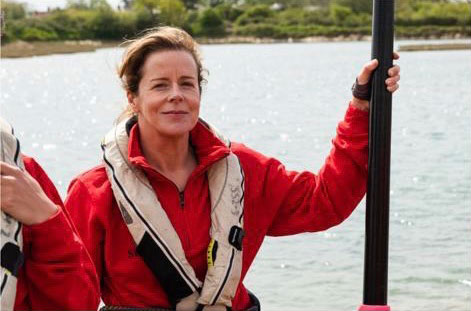