Billed as the world’s toughest rowing race, GBRow 2013 lived up to its reputation when three boats – half of the field – were forced to quit in a spell of just 12 hours today.

At 2am, the Coast Girls – Charlene Ayres and Sally Kettle – were towed by the RNLI to Ramsgate harbour in Kent after both their anchors dragged on the sandly bottom.

There was a danger they could be swept on the breakers just 300 yards away. Charlene, from Cardiff, who suffered from sea sickness for more than three days was treated for dehydration at hospital in Ramsgate. She was released from hospital later this morning. After breakfast she and Sally booked into a local hotel to sleep after their ordeal. 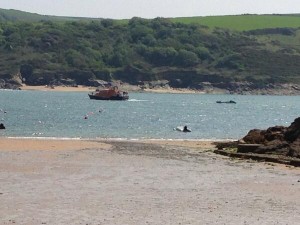 At 10am Brixham Coastguard scrambled Salcombe RNLI lifeboat crew to go the assistance of Pure Gym’s crew, who were adrift a mile off Start Point in Devon in force six winds. The boat’s electrical system, which controls navigation instruments, communications and the water maker, totally failed. The crew of two men and two women battled for 12 hours to repair the fault but when strong force six easterly winds threatened to blow th boat onto the rocks at Start Point, skipper Claire Shouksmith called for assistance, using the boat’s Sat phone.

Without a rudder, the crew risked drifting into shipping lanes or the rocks beneath the cliffs at Land’s End.

Chris Usborne, Race Director, said: “With three boats retiring today, GBRow has had a very bad day, however everyone is safe and safety is paramount to this race.”

In the race itself, The Islanders remain in front but Oarsome Adventures are chasing them down in the Celtic Sea, off Cornwall.

The Islanders in Black Oyster are 30 miles out to sea from Padstowe, with Oarsome Adventures just 11 miles behind them.