Charlie Pitcher has recorded 14 knots on his Atlantic crossing – he has a long way to go to beat the Seagals who notched up a top speed of 19knots on GB Row in 2010. 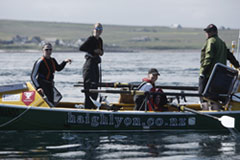 The women’s team took advantage of the tide race in the Pentland Firth to pass John O’Groats at an average speed of 18.1knots for two hours!

Competitors in GBRow 2013 will be aiming to use the tides to their advantage to break the world record and claim the £100,000 bounty.