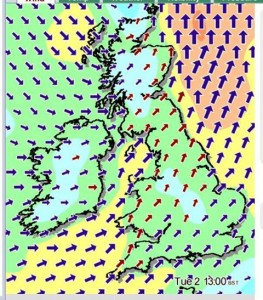 Bad times. Looking at the winds for the next five days we’re going to hit some strong south-westerly winds mixed with other unfavourable conditions…Unfortunately this could set us back a few days. Luckily we have plenty of treats.

We’re hopeful of 39 days but that’s a big ask, looking at the forecast. We’ll do our best.

In the meantime, we’ve generally had some fortunate weather until now, so we can’t complain. It would just be nice to get back to our family and friends…We’ll get there!

They say red sky in the morning, shepherd’s warning.

These shepherds know what they’re talking about, this was the sky we saw this morning. It’s now rain and grey skies. We can handle that. It’s the southerly strong wind that just about to come our way that’s making life that little bit frustrating but when we consider how far ahead of ourselves we are, we have to smile.

We have to make a big push together on the oars when we have a tiny window of opportunity later today. We’ll try together as long as we physically can to find shelter from the oncoming bad weather. Then we’ll just have to wait and see…

GBRow race leaders, the Islanders, are still on track to set a new world record for rowing non-stop aroud Britain.

Tonight Josh Taylor and his crew in the Black Oyster are in home waters off the Essex coast and are on target for reaching the Thames tomorrow morning in time to ride the flood tide all the way to Tower Bridge.

If, as planned they reach Tower Bridge by around 17.00 tomorrow they will knock 12 hours off the current world record of 26days 21 hours 14minutes, which has stood for eight years.

Earlier this afternoon, Janus van Helferton met the Islanders as they passed Felixstowe and took a series of amazing pictures of the Black Oyster and her crew.

Tonight, the were passing Mersea Island near Colchester – home of skipper Josh Taylor and his childhood friend, Alan Morgan.

RIGHT WHO’S GOING TO BE THERE AT THE FINISH? Currently breaking our balls to get that WR…literally two-hour power sessions then pass out in our cabin. Not changed out of lycra in five days…keep watching the tracker. Can’t wait to see you all there at Tower Bridge. Your support and belief is what’s kept us pushing.

And a good luck message from Jason McKinlay and Josh Tarr – 500 miles north in the Moray Firth in second-place Savoir Faire: “We really hope the guys eat that record! They seem to have put in incredible efforts to get back within touching distance. Please pass on our best wishes.”

The battle to set a new world record for rowing non-stop around Britain is by no means over.

GBRow 2013 race leaders, the Islanders, are now rowing at an astonishing 6.3knots off the north Norfolk coast. They have now past Cromer and are heading towards Great Yarmouth, helped on their way by fast-flowing tides and a 6.9knot tailwind.

Skipper Josh Tyalor and his crew – Alan Morgan, James Plumley and Gavin Sheehan – have 53.5 hours left to cover 147miles to the finish at Tower in London if they are to have a chance of beat the existing world record of 26 days 21 hours 14mins, set in 2005.

The Islanders’ boat, the Black Oyster, has been suffering from electrical problems caused by a shortage of sun to operate their on-board solar panels but in a text to race headquarters Alan Morgan said: “V strong tides and not a cloud in the sky. Quite hot. With any luck we will do a Facetime with Mersea School tomorrow morning.

Meanwhile, second-place Savoir Faire were also making just over six knots as they approached the tidal races at John O’Groats. At 21.00 they were less than three miles from the most northerly point on the British mainland.

Blog from Jason McKinlay of Savoir Faire at Cape Wrath, the north-westerly point on mainland Britain:

Today (June 24) Josh [Tarr] and I had a small window to get out of the bad weather but with the current and winds against us, winds 9-13mph, it meant rowing together as far as we could to try and make the 16.2miles to Cape Wrath…and the top of Scotland.

We rowed for five hours, making just 6.2miles and were dead beat. We tucked in to allow the strongest current to pass , to eat and sleep. A 2.5 hour rest and we went again. This time, the current was really strong and in our favour! Nothing in the charts suggested this and our window was getting wider!

We pushed on together for another 4 hours and turned round a nasty Cape Wrath jut before 8pm. The charts are suggesting a current with us of 1.7knots maximum but we were getting 4-6knots with just one on the oars at a time!

While this is awsome, we’re all too aware of the tide changes around 1am, so let’s wait and see…This certainlywasn’t expected and we’ll take it…We continue to swap oars at regular intervals.

BLOG just in from Alan Morgan of the Islanders in Black Oyster off Scarborough:

54 18,172N 00 17.631W Sorry been out of contact. We have very low solar energy, so no phones have been on charge for a while. Things have slightly turned around for us. We finally have a tail wind. So over the last 24 hours we’ve managed to stretch out legs and do some miles. 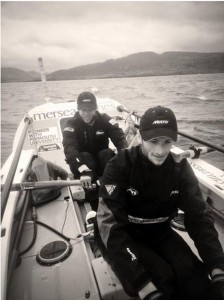 Sea state at the moment is the biggest we have encountered. The big swells are around 40 feet. But on average overnight 15-20ft.

Everyone’s giving it the beans. As a result, literally passing out after each two-hour shift. Unable to even get changed and into dry sleeping bags. So it’s intense.

The plan is to head for Norfolk. It is weather dependent. Fingers crossed!

The race is definitely on, folks! GBRow 2013 leaders, the Islanders, have made more than 40 miles overnight. With the wind still behind, skipper Josh Taylor and his crew in the Black Oyster are catching up on the world record.

Yesterday, with the wind and tide in their favour, they reached a top speed of 7.8knots on the Durham coast. Our photo, right, shows the Black Oyster’s speedo recording 5.8knots.

The Islanders are now almost at Scarborough, with 256 miles to the finish, and if the wind says in a north-westerly direction they may strike out from Flamborough head, straight to Norfolk to cut off the corner. Keep your eyes on the tracker.

Race Director Chris Usborne reports that the Islanders seem to have managed to repair their watermaker and overcome problems with their power supply.

Skipper Josh reported: “Finally wind and swell. We’re surfing to London. Black Oyster loves the surf. We love the surf. 7.3knots is the maximum today so far, come on!”

To beat the current world record for the fastest time ever rowed around Britain – 26 days 21 hours 14 mins – the Islanders, Josh, Alan Morgan, James Plumley and Gavin Sheehan, need to arrive at Tower Bridge in London before 05.30 on Friday morning.